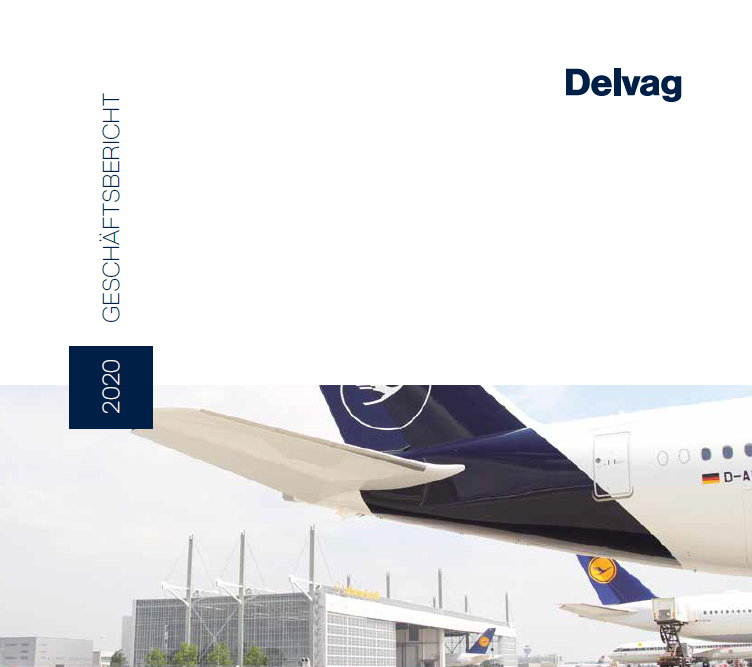 In 2020, Delvag demonstrated its resilience in the face of an extremely challenging environment, which was primarily characterised by the Corona pandemic and its effects. Overall, Delvag achieved a result from ordinary activities of 12.4 million euros in the financial year, slightly below the previous year's result of 12.8 million euros.

"The Corona crisis has also left its mark on our financial results. Especially in aviation insurance, premiums have dropped perceptibly due to the very limited air traffic. Even the increased premiums in marine insurance due to the increased cargo traffic could not completely compensate for this. In combination with a very good claims ratio, our result has nevertheless been robust and, as planned, is just below the previous year's level," says Lorenz Hanelt, member of the Executive Board of Delvag.

"The result proves our resilience as an airline captive and it confirms us in our strategy so far. Thanks to our highly committed employees, we have shown ourselves resilient in this unique crisis and supported our customers inside and outside the Lufthansa Group with individual solutions and excellent service from the mobile office," says Roland Kern, member of the Executive Board of Delvag.

The claims ratio improved in the reporting year to 67.1 per cent (previous year: 73.6 per cent). Especially in transport insurance and aircraft insurance, lower claims payments led to a significant improvement in the loss ratios.

There was also a sharp decline in net earned premiums in the reporting year. These fell by €18.2 million to €49.1 million (previous year: €67.3 million), in particular due to the portfolio adjustment in active reinsurance. The underwriting result before equalisation reserve of Euro 3.2 million was significantly higher than the previous year's result of Euro 0.2 million. An amount of Euro 5.3 million was withdrawn from the equalisation reserves (previous year: Euro 2.7 million). Overall, the underwriting account closed with a profit of Euro 8.5 million in the reporting year (previous year: Euro 2.8 million).

Corona-related business slowdown leads to lower investment income
Non-underwriting business in the year under review was characterised by volatile capital markets and continued low interest rates. The slightly negative market development over the entire year - driven in particular by the stock markets - as well as a lower investment result had a negative impact. The increase in ordinary income - which mainly resulted from fund distributions - was offset by a lower extraordinary result in the financial year. The investment result decreased accordingly to 6.1 million euros (previous year: 10.7 million euros). After deducting the technical interest income, the investment result of € 5.9 million was significantly below the previous year's value (previous year: € 10.5 million).

At the subsidiary Albatros Versicherungsdienste GmbH, a corona-related slowdown in business and correspondingly sharply reduced sales revenues led to a significantly lower profit transfer. In the year under review, a profit of € 3.1 million was transferred to the parent company Delvag Versicherungs-AG (previous year: € 5.4 million). Overall, the non-technical account closed with a total result of 3.9 million euros (previous year: 9.9 million euros).

Despite the extremely challenging environment, Delvag was able to close the 2020 financial year with an overall result from ordinary activities of 12.4 million euros. This result is only slightly below the previous year's result of 12.8 million euros. In contrast to the previous year, profits will be transferred in full to Deutsche Lufthansa AG.

In 2021, Delvag will continue to focus its activities on profitable growth in the core insurance businesses and on optimising earnings potential. A moderate increase in gross and net premiums is expected for the transport insurance business. In the aviation insurance business, Delvag expects stagnating sales, as there is a direct dependency on developments in the airline sector, where the Corona pandemic is also expected to cause a slowdown in 2021. The strategic realignment of the reinsurance business segment that was initiated in the reporting year will be continued in 2021. The focus will be on expanding individual and innovative insurance solutions to strengthen the captive function within the Lufthansa Group and the associated coverage of further Group risks.

Despite a rising investment result for the subsidiary Albatros, the non-insurance result is expected to be slightly below that of the reporting year. Volatile capital markets as a result of production losses and lower demand in many industries as well as further interventions by central banks may influence the investment result. Against this background, the Executive Board expects the overall result for the 2021 financial year to be slightly below the level of the reporting year.