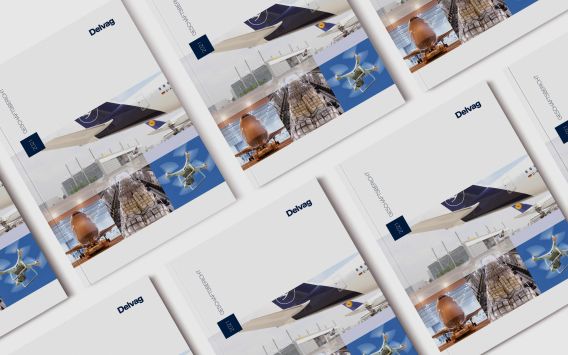 Delvag also demonstrated resilience in the second year of the Corona pandemic and closed 2021 successfully. Overall, the company achieved a profit on ordinary activities of 16.4 million euros in 2021 (previous year: 12.4 million euros).

"Despite ongoing challenges, we have once again demonstrated our resilience in 2021. This is also reflected in our result. The aviation sector has shown an initial recovery, which is accompanied by corresponding increases in premiums. In combination with the effects from the strategic realignment of the reinsurance devision and a further improvement in the loss ratio, we have generated a very good result," says Lorenz Hanelt, member of the Executive Board of Delvag.

"The result confirms us in our ongoing strategy of achieving profitable growth in our core businesses. Our thanks go above all to our employees, who have contributed to our economic success with their above-average commitment. It is them who have successfully accompanied our customers and our company through the pandemic," says Roland Kern, member of the Executive Board of Delvag.

In assumed reinsurance business, Delvag increased premiums to 31.2 million euros (previous year: 22.2 million euros). This increase resulted mainly from higher premium income in aviation insurance and general accident insurance. The strategic realignment of the reinsurance divison, i.e. the separation from active third-party business, continues to proceed as planned. In this context, Delvag has concluded a loss portfolio transfer (LPT) with retroactive effect from 1 January 2021. The resulting positive effects on gross premiums and claims expenses ultimately led to an improvement in the underwriting result.

The claims ratio improved significantly in the reporting year to 41.3 percent (previous year: 67.1 percent). Especially in transport insurance and aircraft insurance, lower claims payments led to an improvement in the loss ratio.

Despite the still challenging environment, Delvag generated an overall result from ordinary activities of 16.4 million euros. As in the previous year, profits were transferred in full to Deutsche Lufthansa AG.

In 2022 Delvag Versicherungs-AG will continue to concentrate on growth in its core business, with the focus on profit-oriented underwriting. In addition, the development of the captive function for the Lufthansa Group will be driven forward. Overall, the Executive Board expects the overall result for the financial year 2022 to be below the high level of the reporting year, which was also due to special effects.

Further information on the result, the individual divisions and the outlook will be published in the annual report. The report will be published at the same time as this press release on 05 May 2022 at www.delvag.de/publications.